Reporter Kim Briggeman can be reached at 523-5266 or kbriggeman@missoulian.com

The Sioux warrior who is said to have killed Custer glances at a camera from the back of his hooded horse on Page 65.

On Page 116 of Gary Glynn’s “Historic Photos of Montana” a toddler sits on a porch in Quigley, the once-booming mining town up Rock Creek. His hand is on a bear cub.

“A lot of people have commented on that one,” Glynn said recently. “If you did that today, family services would haul you in.”

The images come rapid-fire, some 200 of them from through the years, with minimal text between: a downhill look at the gritty streets of Walkerville, an open-air passenger car in front of the oldest home in Missoula, the starkness of a sod house on a homestead near Judith Gap.

“I looked for photos that appealed to me,” Glynn said. “It showed what I was really looking for was kind of the lives of everyday people.”

That was what Nashville-based Turner Publishing Co. had in mind when it tabbed Glynn to produce the latest coffee table book of Montana history photographs. Turner is publishing similar books for states and cities throughout the nation. As young and unpeopled as it is, Montana is a gold mine for these things, and many black-and-whites have been collected in archives from the Mansfield Library at the University of Montana to the state historical
library in Helena to the Library of Congress in Washington.

Problem is, they’re not readily available to the public, publisher Todd Bottorff notes. A book like this provides “easy access to a valuable, objective look into the history of Montana.”

Indeed, the photos celebrate objectivity. There’s something right about Montana in black and white. These aren’t the crystalline lakes, the majestic mountains, the waves of grain painted in living color in the imagination by much of our literary history. These are, most of them, the clothes and expressions we wore, the roads we drove to get to those mountains, the entrails of the Yogo sapphire mine, the Missoulian newsboy-all but lost in a group shot of more than 80 – pointing his own imaginary camera as Roland McKay’s clicks in front of the county courthouse.

He had few parameters, said Glynn, 52, a writer with a deep appreciation for history and Montana’s part in it. “Basically they wanted to cover the history of the state, from the first photographs we could find up until the mid-1960s,” he said. “Other than that there weren’t a lot of requirements.” The author of “Montana’s Home Front During World War II,” Glynn
has published articles in a number of military, aviation and American history magazines and was a regular contributor to the Missoulian’s “Greatest Generation” project during the 50th anniversary of World War II.

Glynn said he quickly discovered the project’s limitations. There aren’t a lot of photos out there from, say, the raucous early days of the territory because there weren’t many cameras in the 1860s and ’70s. And there aren’t many images from the 1950s and
’60s available, either. “I think a lot of those aren’t in public domain. People haven’t
donated them to the Library of Congress or the university yet,” Glynn said.

His book is divided into four eras beginning in 1860, 1900, 1920 and 1940. Nearly half of the photos come from the first 20 years of the 20th century, when the likes of McKay, Edward H. Boos, Edward S. Curtis, and UM professor Morton Elrod roamed the state with
their glass plates and Kodak Brownies.

Another challenge: most of the images Turner and Glynn dug up were taken in western Montana and, specifically, Missoula. Three of the above-named photographers made their homes here.

“I tried to put some balance into it and get more photos from eastern Montana,” said Glynn, who grew up in Billings and helps manages his family’s ranch south of Two Dot in the Musselshell country.

Joseph White Bull helped with that. A nephew of Sitting Bull, White Bull described to a biographer in 1934 the desperate hand-to-hand struggle he had with George Armstrong Custer on the bluff above the Little Big Horn in 1876. According to Stanley Vestal’s interpretation, the struggle ended when White Bull grabbed Custer’s carbine and shot him in the chest.

Another Mansfield collection he plumbed was that of John Dunn. A carpenter by trade, Dunn helped build UM’s Main Hall and many homes in the university area. But in his leisure time he was an avid photographer. His wife and kids were frequent subjects, said Glynn,
but Dunn’s images of the Missoula area are among the more compelling in the book.

One shows a marching band on East Front Street around 1900, with nothing in the blocks between the band and the wooden courthouse but low hedges and a tall cottonwood tree.

Glynn was responsible for writing the text, which complements but stays neatly out of the way of the main attraction, the photos. Nonetheless, his one-page essays preceding each of the four eras are succinct and accurate historic accounts that serve as adequate
Reader’s Digest version of Montana’s history since its territorial beginnings.

Glynn was at a book signing at Barnes and Noble in Missoula recently when the cover of “Historic Photos of Montana” caught the eye of a passing woman. It’s a photo from the Missoula Stampede, an annual Fourth of July event, taken in about 1940, Glynn said.

A bronc rider, black hat intact and chaps a-flying, clings to the vertical back of a rearing horse. A pickup man’s grip on the horse’s bridal and reins is the only thing keeping the animal from tumbling over on top of the cowboy. “That’s my dad,” the lady said, pointing to the rider. “And that’s my uncle,” she said, pointing to the pickup man. 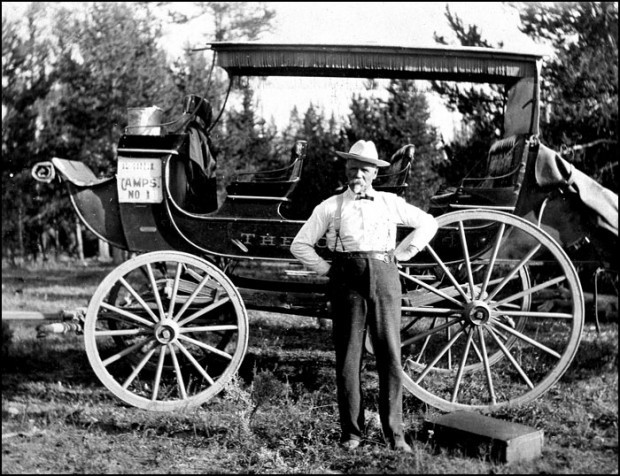 Bozeman resident George W. Wakefield began operating the first stage line into Yellowstone National Park in the 1880s. The former gold prospector charged $40 for a 10-day, all-expense-paid camping tour of the park aboard one of his 10-passenger Concord Coaches. Leslie Watson “Gay” Randall Papers; Archives and Special
Collections, The University of Montana-Missoula, 81-0429

Welcome to The Write Question, a program that explores the world of writing and publishing in the western United States. Our guest today is Gary Glynn for Missoula, Montana.

Glynn has been writing about the Treasure State for more than 20 years. A fourth-generation Montanan, he grew up in Billings and received a degree in natural resource management from the University of Montana School of Forestry.

Glynn is the author of two books: Montana’s Home Front During World War II and Historic Photos of Montana. He has also written for a number of magazines and newspapers, including American History, Montana Magazine, Aviation History, The Missoulian, and Montana West.

Gary Glynn currently serves on the board of his family’s ranch, as well as on the Board of Trustees for the Historical Museum at Fort Missoula.