• March 2 – Eight Japanese transports and four destroyers sank during the three-day Battle of the Bismarck Sea.

• March 6 – A major snowstorm forced closure of highways and the Great Falls Army Air Base.

• March 20 – Two Nisei farm workers were killed by a train.

• March 25 – One hundred basements were flooded in Butte. Malta was flooded by Black Coulee Creek.

• March 30 – The rail line between Butte and the Anaconda smelter washed out.

Interested in events that occurred in 1943 in Montana? Read More about Montana’s Home Front During World War II 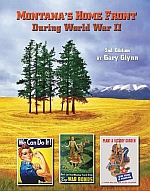 • February 18 – The sale of canned meat was suspended.

• February 27 – A massive explosion rocked the Smith Mine at Bearcreek, trapping 74 men inside.