A calendar of Gary Glynn’s book publication dates, book-signings, and other public appearances.

March 1 – Book signing of That Beautiful Little Post: The Story of Fort Missoula and other books at Barnes & Noble in Missoula, 2-4. Please drop by and say hello.

October 2013 – Publication of  That Beautiful Little Post: The Story of Fort Missoula

September 29, 2012 – Gary Glynn presents  “Patriotism, Treason, or Subterfuge for the 2012 Teacher’s Workshop at the Historical Museum at Fort Missoula. 9:00 a.m.

“Fascinating story and the teachers got a lot out of it!” Doreen Might Dyer, Education Curator, Historical Museum at Fort Missoula. 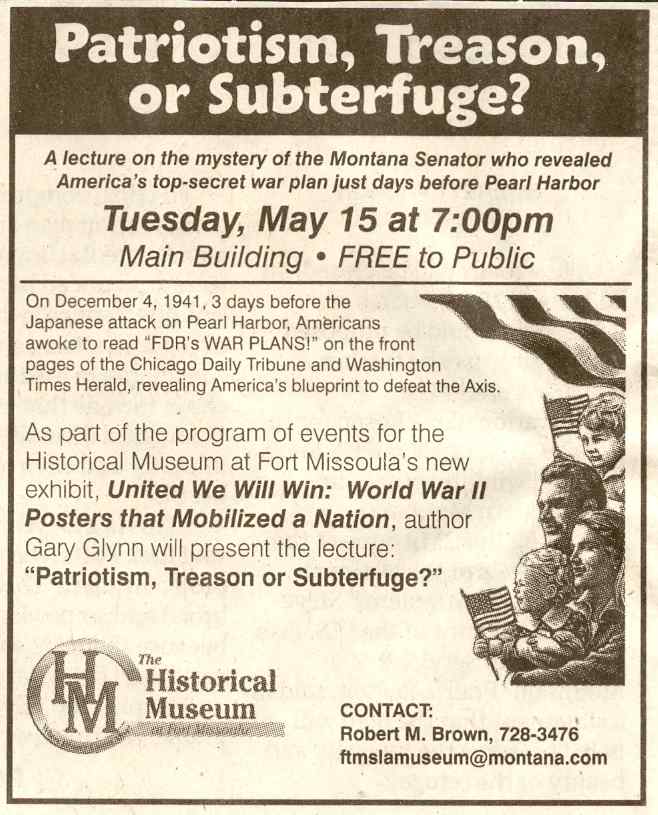 May 15, 2012 – Gary Glynn presents the lecture “Patriotism, Treason, or Subterfuge. The mystery of the Montana Senator who revealed America’s top-secret war plan just days before Pearl Harbor.” 7:00 p.m. at the Historical Museum at Fort Missoula

December 2011 – The Kindle and Nook versions of Montana’s Home Front During World War II, 2nd Ed. are available at Amazon.com and Barnes and Noble. The print version is published

April 5-9, 2011 – Research at the Montana Historical Society archives as part of a Dave Walters Fellowship

April 13, 2011 – Gary Glynn was awarded the James Moss award for “outstanding service” at the Friends of the Historical Museum at Fort Missoula annual dinner.