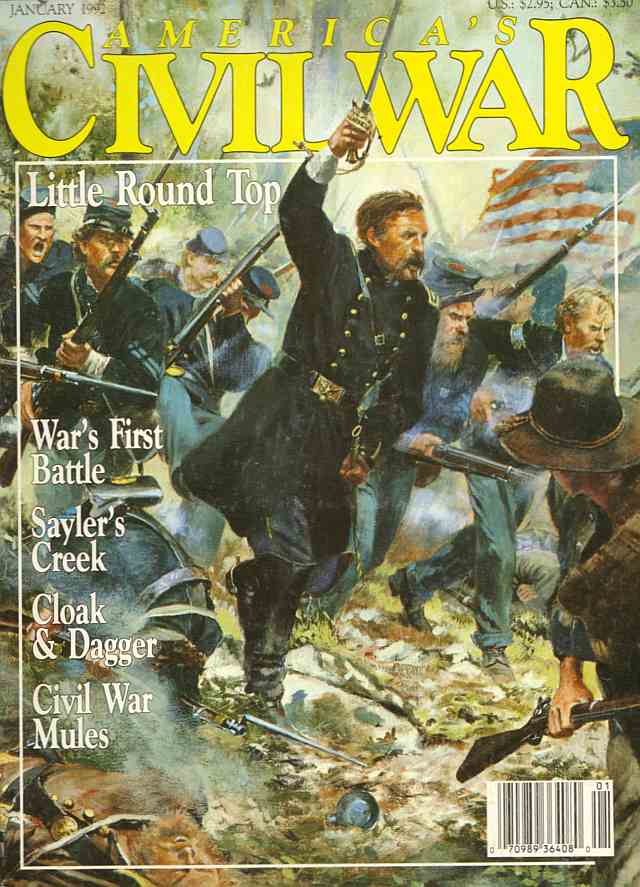 As the Union soldiers across the creek began to advance,  the eccentric General Ewell remarked, “Tomatoes are good. I wish I had some,”[10] and then rode to the rear to find out how Anderson’s attack against Custer’s men was coming along. “Dick” Anderson Corps consisted mainly of Bushrod Johnson’s division in the lead, General Henry Wise’s brigade in the middle, and the remains of George Pickett’s division, 6,000 men in all. Facing them were three divisions of cavalry, 8,000 Federal horsemen commanded by Generals George Crook, George Custer, and Thomas Devin. Anderson’s ordered an assault on the Yankees, but his “troops seemed to be wholly broken down and disheartened.” The attack disintegrated almost immediately, and the Federal cavalry swooped down the hill. General Crook’s division shattered Bushrod Johnson’s division, while Custer and Devin hit Pickett’s men. Most of the exhausted and starving Confederates simply broke and ran before the Federal horsemen. General Pickett of Gettysburg fame, rallied some of his staff around him, fired a volley at the advancing Federals, and escaped in the confusion. Fitz Lee (Robert E. Lee’s nephew) evaded capture in a similar manner. General Henry Wise’s brigade managed to fight their way out of the melee and turned towards Farmville. At one point Wise ordered his men to fire three volleys to the rear and three volleys to the front. On one of these volleys a Confederate brigade hiding in the woods came out waving white flags, and Wise added them to his own command as they made their escape. General Bushrod Johnson, accompanied by a mob of disoriented teamsters and soldiers, fled toward Rice’s Station with Merritt’s Union cavalry hard at their heels.

Meanwhile, all along Ewell’s line the men waited as the attacking lines of bluecoats crossed the creek and began marching up the hill. Waiting for them, Major Robert Stiles thought his men looked, “blanched and haggard and awe struck.”[11] Stiles waited until the Federal line was within fifty yards before giving the order to fire, and he described the devastation of the Confederate volley. “The enemy seemed to have been totally unprepared for it…the earth appeared to have swallowed up the first line of the Federal force in our front. There was a rattling supplement to the volley and the second line wavered and broke. The revulsion was too sudden. On the instant every man in my battalion sprang to his feet, and, without orders, they rushed bareheaded and with unloaded muskets, down the slope after the retreating Federals. I tried to stop them, but in vain, although I actually got ahead of a good many of them. They simply bore me on with the flood.” [12] The sudden charge drove the Yankees back, but they soon regrouped and advanced again. Major Stiles managed to get his men back to their original position just in time to face the next attack. A Confederate private who was there wrote, “Near the end the 37th Massachusetts had the fiercest literally savage encounter of the war with the remnants of Stile’s battalion and the Marines. I was next to those Marines and saw them fight. They clubbed muskets, fired pistols into each other’s face and used bayonets savagely.”[13] Major Stiles himself said, “quicker than I can tell it the battle degenerated into a butchery and a confused melee of brutal personal conflicts. I saw numbers of men kill each other with bayonets and the butts of muskets, and even bite each other’s throats and ears and noses, rolling on the ground like wild beasts. I saw one of my officers and a Federal officer fighting with swords over the battalion colors, which we had brought back with us, each having his left hand upon the staff. I could not get to them, but my man was a very athletic, powerful seaman, and soon I saw the Federal officer fall.”[14] Morris Schaff, a reporter who sketched the scene from the Union side of the creek, described a portion of the confused battle. “One Berkshire man [37th Massachusetts] was stabbed in the chest by a bayonet and pinned to the ground as it came out near his spine. He reloaded his gun and killed the Confederate, who fell across him. The Massachusetts man threw him off, pulled out the bayonet, and despite the awful wound, walked to the rear.”[15]
Two lines of Federals, elbow to elbow, attacked across the creek, and hit the right of the Confederate line but were driven back by a volley at 50 yards. Kershaw’s men charged the overwhelming numbers of Yankees, and Kershaw later said “On no battlefield of the war have I felt a juster pride in the conduct of my men,” but more infantry were pouring at them from the right flank, and they were soon overwhelmed.[16] Along the Confederate left, Custis Lee, sword in hand was there “in perfect dignity and composure,” but most of his men were clerks from Richmond, and they were quickly outflanked. [17] The survivors grudgingly laid down their arms and surrendered. Major Stiles and William S. Basinger 18th Georgia Battalion retreated through a ravine back up the hill, but were soon rounded up Federal Cavalry. Commodore Tucker’s men retreated to the woods, until discovered later by the Federals, who demanded their surrender. The astonished Tucker remarked, “I never before got into a fight like this. I thought everything was going on well.”[18]

General Ewell, who had ridden over to observe Anderson’s attack, ran into a line of Union skirmishers as he attempted to return to his command. In his words, “This closed the avenue of escape; as shells and even bullets were crossing each other from front and rear over my troops, and my right was completely enveloped, I surrendered myself and staff to a cavalry officer.”[19] Ewell persuaded the Union cavalry officer who had captured him to take a message to General Custis Lee, urging him to surrender also, but Lee had been captured before the message arrived. Many of the prisoners begged food from the Federal soldiers, then, overcome with exhaustion, they promptly fell asleep near Sayler’s Creek.
It was at this moment that Robert E. Lee and General Mahone, who were searching for the missing Ewell and Anderson, topped a rise and saw the battlefield below them. Mahone described the scene, “the disaster which had overtaken our army was in full view and the scene beggars description-hurrying teamsters with their teams and dangling traces (no wagons), retreating infantry without guns, many without hats, a harmless mob… Lee at the sight of the spectacle, straightened himself in the saddle and exclaimed, as if talking to himself, ‘My God, has the army dissolved?'”[20]

Meanwhile, John B. Gordon’s men were still following the Confederate wagons along the northern most route to High Bridge, dogged every step of the way by Humphrey’s II Corps. The road Gordon took ran northwest for two miles, then turned west and crossed Sayler’s Creek at the confluence of two forks. At 4 P.M. a bridge collapsed over one of the two forks, slowing the wagons. And then, in Gordon’s words, the Federals “struck my command while we were endeavoring to push the ponderous wagons trains through the bog, out of which the starved teams were unable to drag them.”[21] “Many of these wagons, loaded with ammunition, mired so deep in the mud that they had to be abandoned. It was necessary to charge and force back the Union lines in order to rescue my men…” One of the Union attackers described the Confederate reaction. “There was wild screaming and clawing to get out of the way of the confounded Yankees. Our column dashed forward to secure the spoils, but every rock and tree, every fence and hillock, seemed alive and offered resistance. Wagon after wagon was overturned, its contents confiscated and scattered to the winds.”[22] Gordon’s men fought, “with a spirit and deadliness that would have kindled the eyes of [Stonewall] Jackson,” according to another onlooker, but it was not enough, as more and more Federals were pouring in from the scene of Ewell’s defeat. Finally, General Gordon’s position became untenable and his Confederates broke under the pressure and fled across the creek, leaving 1,700 prisoners, 70 ambulances, 3 guns, and 13 battle flags. Gordon’s men formed up on a ridge east of Sayler’s Creek, where he sent a message to Lee at 5:00 P.M.
“I have been fighting  heavily all day. My loss is considerable and I am still quite closely pressed. I fear that a portion of the train will be lost as my force is quite reduced and insufficient for its protection. So far I have been able to protect them, but without assistance can scarcely hope to do so much longer. The enemy’s loss has been very heavy.”[23]

The occupation of Veracruz, New Mexico